Next Saturday (11/12/2011), my new piece Caladan will be premiered in the concert Spacy Sounds in the Schönbrunner Schlosstheater in Vienna. The piece was written for the new “Spatial-Acoustics-Instrument” of the University of Music and Performing Arts Vienna, which is a combination system of Ambisonics and Wavefield Synthesis. This instrument will be introduced to the public during this concert. Next to my piece, there will be music by Karlheinz Essl, Richard Karger, Katharina Clement, Marko Ciciliani,  Caroline Profanter, Igor Lintz-Maues, Onur Dülger and more.

A part of Caladan will be previewed two days earlier at the same place, during a gala of the university. Thereby, single sounds of the piece will be gestically spatialised by the usage of two Theremin-Controllers. 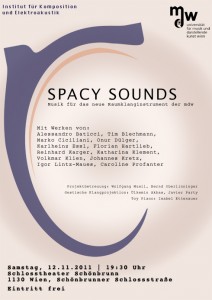